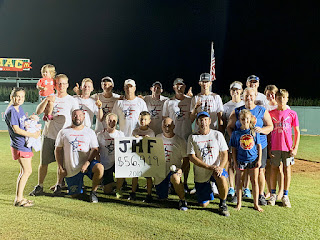 The 2019 Jake Hodge Wiffle Ball Tournament raised almost $60,000 to fund scholarships for graduates of Crittenden, Lyon, Caldwell and Trigg counties, plus another one for a high school rodeo participant.

The foundation was started by Denis and Shannon Hodge as a lasting memorial to their son who died unexpectedly at age 12 in 2008. Ken and Katie Parker of Princeton host the Wiffle Ball Tournament at two miniature, replica ballparks called Little Busch Stadium and Little Fenway Park South.

Dono McGregor, pitcher for The Press team, was named Most Valuable Player and he was also selected as a JHF Wiffle Ball Hall of Famer.
Posted by Jake Hodge Memorial Foundation at 2:15 PM No comments: