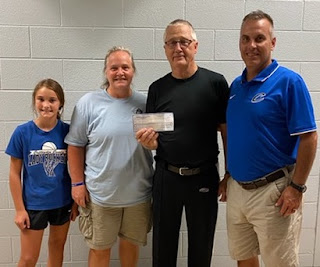 A great big thank you to the Princeton Elks Club for its $5,000 donation to the Foundation.

Contact us to find out how you or your group or organization can help us make college dreams come true for area high school seniors.

Posted by Jake Hodge Memorial Foundation at 2:21 PM No comments:

The Heat is On: Record-Setting Fundraiser 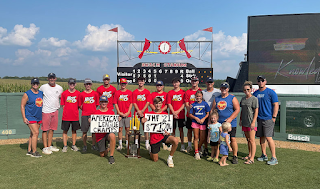 The JHF raised more than $73,500 for scholarships that will be awarded to area seniors.

Great weather helped fuel the 2021 Wiffle Ball Tournament which featured a tournament record for homers and hits. See all of the JHF Wiffle Tournament stats and more here

Champions of the feature bracket was The Heat.

The 2021 JHF Foundation tournament raised a record $73,616.  That was not the only record that was shattered.

The tournament was divided into two divisions, American and National League.  The Heat won the American League and the CC Cubs were national league champs.  Carter Whittington (Heat) was named AL MVP while Anna Boone (Wiffle Woders) was NL MVP.  Boone was the first multi hr hitting female in tourney history.  Gavin Mitchell of the Cubs set a record for most hits in a tourney (13).  Gabe Board moved into a three way tie (Dono McGregor and Gordon Dugan) for most hits in a career (39).  Brandon Sigler cemented his legacy taking over all time HR lead with 15 in his career.

Your Sports Edge led by the Isom boys had a good showing but came up just short against the Heat in the AL Championship.  Defending champs Free Press were 0-3 as star Dono McGregor has just came off injured list.   It was a great weekend had by all.

Posted by Jake Hodge Memorial Foundation at 5:07 PM No comments: